There are three components that form lubricating grease. These components are oil, thickener and additives. The base oil and additive package are the major components in grease formulations, and as such, exert considerable influence on the behaviour of the grease. The thickener is often referred to as a sponge that holds the lubricant (base oil plus additives).

Most greases produced today use mineral oil as their fluid components. These mineral oil-based greases typically provide satisfactory performance in most industrial applications. In temperature extremes (low or high), a grease that utilizes a synthetic base oil will provide better stability.

The thickener is a material that, in combination with the selected lubricant, will produce the solid to semifluid structure. The primary type of thickener used in current grease is metallic soap. These soaps include lithium, aluminium, clay, polyurea, sodium and calcium. Lately, complex thickener-type greases are gaining popularity. They are being selected because of their high dropping points and excellent load-carrying abilities.

Complex greases are made by combining the conventional metallic soap with a complexing agent. The most widely used complex grease is lithium based. Non-soap thickeners are also gaining popularity in special applications such as high-temperature environments. There is a misconception however, that even though the thickener may be able to withstand the high temperatures, the base oil will oxidize quickly at elevated temperatures, thus requiring a frequent re-lube interval. 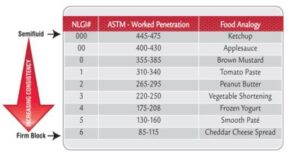 Additives can play several roles in a lubricating grease. These primarily include enhancing the existing desirable properties, suppressing the existing undesirable properties, and imparting new properties. The most common additives are oxidation and rust inhibitors, extreme pressure, anti-wear, and friction-reducing agents. In addition to these additives, boundary lubricants such as molybdenum di-sulphide (moly) or graphite may be suspended in the grease to reduce friction and wear without adverse chemical reactions to the metal surfaces during heavy loading and slow speeds.